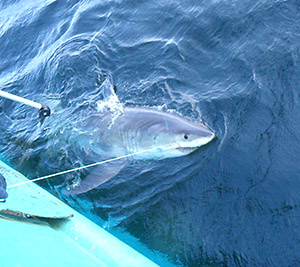 Researchers captured and tagged more than 2,800 sharks while conducting the 2015 Coastal Shark Survey, the most in the survey’s 29-year history.

The survey began in 1986 and is conducted every two to three years.  It covers coastal waters from Florida, where coastal shark species concentrate during the winter and spring, north to Delaware, where many shark species migrate during spring and summer as more northerly waters warm. Following this migratory route, at this time of year, makes it easier to survey the whole population.

This year, the survey was conducted aboard the 100-foot charter fishing vessel Eagle Eye II from Port Royal, South Carolina, from April 4 to May 22, and from just south of Ft. Pierce, Florida to North Carolina. As in 2012, poor weather and time prevented sampling further north.

The surveys are conducted in the 5-40 fathom (30 to 240 feet) depth zone with most sampling between 11-20 fathoms (66 to 120 feet deep) and use commercial Florida-style bottom longline fishing methods to standardize survey results. This method uses a long, or main, line with baited shark hooks spaced at regular intervals along the line.

Most (2,179, or 77 percent) of the sharks captured were tagged and released, 434 (15.3 percent) were brought aboard, and 222 (7.8 percent) were released untagged or lost. Researchers record the length, sex, and location of each animal caught. Environmental information, such as water temperature and ocean chemistry, was also obtained at each station.

During the survey, sharks that do not survive capture are dissected at sea to obtain biological samples important for studies on shark age and growth, reproduction, and food habits. On this survey, reproductive information was obtained from 170 sharks, backbones were removed for age and growth work from 109 sharks, and stomachs were examined in 82 sharks. The scientists also collect parasites, DNA and blood samples.

The survey’s primary goal is to gather information about the distribution, abundance, and species composition of sharks found in these waters, according to Lisa Natanson, a scientist at the Narragansett Laboratory of  NOAA Fisheries’ Northeast Fisheries Science Center (NEFSC).  Survey objectives also include tagging sharks for migration studies and collecting catch-per-unit-effort data.

NOAA Fisheries is charged with managing commercial and recreational shark fisheries in U.S. waters, including the Caribbean Sea and the Gulf of Mexico. U.S. shark management efforts began in 1993; currently 42 species are managed.

In addition to Natanson and colleagues from the NEFSC’s Narragansett and Woods Hole Laboratories, researchers participating in the 2015 survey came from the Southeast Fisheries Science Center, Florida Atlantic University, and the University of New Haven.