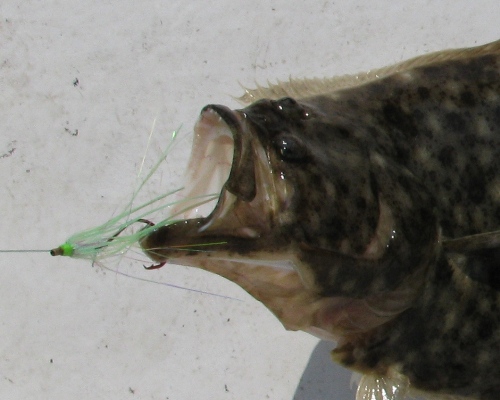 In Virginia, anglers have several choices of bait, tackle, and equipment for catching flounder.

Mummichogs, known locally as “bull minnows” are by far the most popular bait for catching flounder in Virginia. These hardy baits are inexpensive, readily available, and catch fish in a wide range of environments.

Silversides are another popular bait. Like bull minnows, these fish are found in Virginia in great numbers and are a mainstay of flounder diets. Silversides are available frozen from local tackle shops. Silversides are usually hooked thru the eyes with a kahle hook. Anglers sometimes add 2-3 fish per hook in hopes of attracting a greedy fish.

Flounder frequently bite off the back half of silversides, which frustrates many novice anglers. This problem can be lessened by keeping a loose drag and paying out line when a bite is detected.

Spearing are sometimes used for catching flounder. These fish are not found locally, but catch fish when fished correctly. Spearing are long and slender, resembling a small eel.

Spot are highly prized for catching trophy flounder, especially in the late summer and fall. In many areas, small spot can be caught in advance using a variety of methods, or purchased from local suppliers. Live spot are often fished around structure such as the Chesapeake Bay Bridge Tunnel or other areas of wreck, reef, or rubble.

Croaker can be an excellent flounder bait. In the Chesapeake, large bait strips are made from croaker fillets and fished on a long, single hook leader. Like spot, croaker can be fished live, although it is usually harder to find small individuals.

Finger mullet are popular among surf anglers. These cigar shaped baitfish can be purchased or caught fresh with a cast net. Small mullet can be fished whole or cut into strip baits.

Squid is the most widely available bait for flounder. Options range from frozen grocery store variety calamari to pre-cleaned jumbo squid mantles. Regardless of the origin, squid should be white, fresh smelling and firm. Squid works best when cut into long strips that resemble a baitfish when passed thru the water.

Soft crabs are a top flounder bait in certain areas. In much of the Chesapeake Bay, flounder lie in ambush along channel edges, gorging on soft crabs that are swept into deeper water. During peak periods of the crab molting season, fishing a half or whole soft crab can provide anglers with trophy class flounder.

Lizardfish can be a bane to flounder fishermen. These torpedo-shaped fish are aggressive and often take baits meant for flounder. The good news is that fresh cut lizardfish can be an effective bait for catching flounder and other species.

A little known bait for fishing ocean structure is strips made from dolphin fish belly. These colorful fish have a section of brilliant yellow skin along their underside that normally gets discarded during the cleaning process. Experienced anglers often save these for use as flounder baits. Dolphin bellies should be cut into strips and coated liberally with kosher salt before freezing. If properly brined and frozen, these baits retain their color and tough texture for months.

The most popular leader for catching flounder is a basic 2 hook flounder rig. There are many variations of this rig, but most feature some combination of plain hooks, teasers, beads, and spinner blades.

The single hook flounder rig is also popular and has several important applications. This rig typically includes a single long (36-42″) leader which is attached to a 3 way swivel. The 3-way swivel allows for the sinker connection as well as the running line. These rigs usually include a series of beads, a rotating blade, and bucktail hair teaser.

In some situations, a Carolina rig is useful for catching flounder. These rigs employ a long leader, with an inline egg or torpedo sinker set from 18-36″ above the bait. Similar to the single hook rig, the Carolina rig usually employs a teaser and perhaps a spinner blade.

A variety of jigs are useful for catching flounder. These include basic rigs such as a bare jig tipped with a live minnow as well as more intricate setups. Some anglers choose to combine bucktail jigs with live or cut baits while others may use only artificial components.

Each of these leader types offer several variations. Some anglers prefer the bare essentials, while others choose to add attractants, such as bucktail deer hair, mylar or vinyl skirts. Other fish attracting components include colored beads, spinner blades and scented sprays.

A relative newcomer to flounder fishing is the circle hook. Several variations of this design are popular, with anglers split on offset vs. non-offset styles. Circle hooks can be extremely useful for experienced anglers.

Circle hooks require a special technique in order to perform correctly. When a bite is felt, the angler lowers the rod and reels in slack until the fish is hooked. Attempting to set the hook with a snatching or jerking motion usually results in missed strikes with these unusual hooks.

Despite being less user-friendly than conventional hooks, circle hooks have important advantages. First and foremost, circle hooks reduce mortality by hooking most fish in the corner of the mouth. Secondly, they seldom pull out as they almost always embed in a strong part of the jaw.

Although circle hooks are not accepted by everyone, their use has increased dramatically in the last decade. These revolutionary hooks can be a great took to help reduce gut hooking, which reduces flounder stocks and wastes a valuable resource.

Depending on the water depth, current and weather conditions, anglers may need a variety of rod and reel combinations. The basic flounder fishing outfit is a spinning rod and reel spooled with 10-15 pound line.

Some anglers prefer using baitcasting outfits, which have several advantages. These reels are particularly useful for feeding line out during the initial bite. Baitcasters are often used when fishing deep water, such as ocean wrecks or deep channel edges of the Chesapeake Bay. Depending on the application, lines may vary from 15-30 pound, either monofilament or braided line.

Several trolling rigs are sometimes used to catch Virginia flounder. Heavy trolling gear is necessary in areas such as the Chesapeake Bay Bridge Tunnel. These specialized outfits usually employ braided or single strand wire or new generation braided lines. Depending on current flow, weights may vary from 8-32 oz. Trailing as much as 30′ behind is one or 2 jigs or a single strip bait. While ungainly to use, these rigs can be extremely productive in hard running currents.

In other areas, conditions may allow lighter rods, smaller lines, and less weight. Anglers sometimes troll very slowly over productive areas when conditions do not produce a suitable drift.

How to Clean and Fillet Flounder